THE JULY 4TH THAT WENT TO THE DOGS

The Canadian side of our family usually spends July 4th in the USA with relatives. This year was different in many ways. the kids have grown up, started new lives, and found new activities. There was not one child in our midst, and the majority of us were 50 and older.

The eight-hour trip was spent reminiscing, which equaled eight-hour of free counselling. “Remember the hammock in our converted school bus?” “I don’t remember that.” “I never got to sleep in it because you weighed less.” Glare, giggles, laughter.

Our destination was Auntie Judy’s house in North Dakota and when we arrived one tent was in the process of being set up. For many years, there have been five or six tents, campers, and six or seven vehicles in the yard. This year, there were only three tents and eight vehicles (prime corner lot on the parade route). Some opted for motel rooms – age does that to you.

As families arrived it became evident that dogs had replaced kids this year. 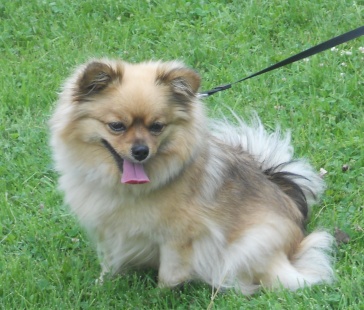 Fluffy little Sunshine was the resident dog and this was her turf. 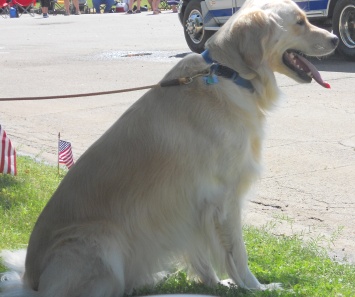 Second to arrive was a full-sized golden retriever named Toby, laid back and poised.

Next to arrive was Piper, a long-haired Chihuahua, most happy in human arms.

Four dogs, four temperaments, and four sets of owners. They might have been great friends if they didn’t have to protect their owners. Add a parade with fire engines and police cruisers blaring their sirens, a city band, and bag pipes, and you get the idea.

This July 4th had gone to the dogs, but it wasn’t the dogs fault.

With no children to pick up candy thrown from the floats, our young-at heart adults fought over every Freezie,Tootsie roll, and sucker. One float had a sign, MAKE NOISE FOR CANDY. We made noise, candy was thrown, our young adults scooped it up, and gleeful guys on the float drenched them with super soakers. Toby sat calmly on the curb, enjoying it all. 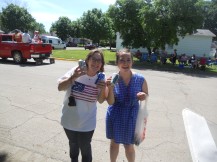 Candy was thrown with a scoop shovel from the back of an ancient truck. The Tavern float even gave out Lite Beer if you were of age and asked for it.

A lot of families in our small town shoot off fireworks on the street. This year we had our very own pyromaniac, shooting off home-made boomers containing bits of dynamite. Neighbours in both directions kept cheering him on. Poor Toby turned inside out with the first blast, but an ‘uncle’ put him back together again, while Piper and Sunshine shivered in their owner’s arms. Hard to believe our family has been doing these crazy things for years with no injuries. (We’re all fast runners.)

The evening of July 3rd we watched 20 memory lanterns float through the sky in a long line, sent up by a neighbour. The evening of July 4th was when our plans went to the dogs. (Apologies to our dogs). Some of our fireworks didn’t fly! One rocket exploded right in the tube. From out of the dark a voice said they had some like that too. Then there was the memory lantern: that, held up, pushed up, prodded, nudged with a pole and finally saw its demise, crumpled up on our campfire.

By that time we had all dissolved in laughter.

Disclaimer: No dogs were injured in the making of this blog. 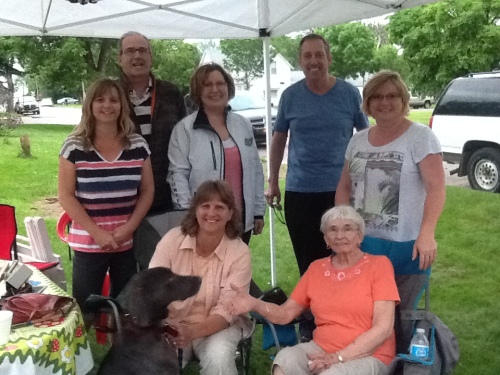 The outlaw side of the gathering.

Families are a great blessing from the Lord.